Verlinde and SERE Maintenance fit out 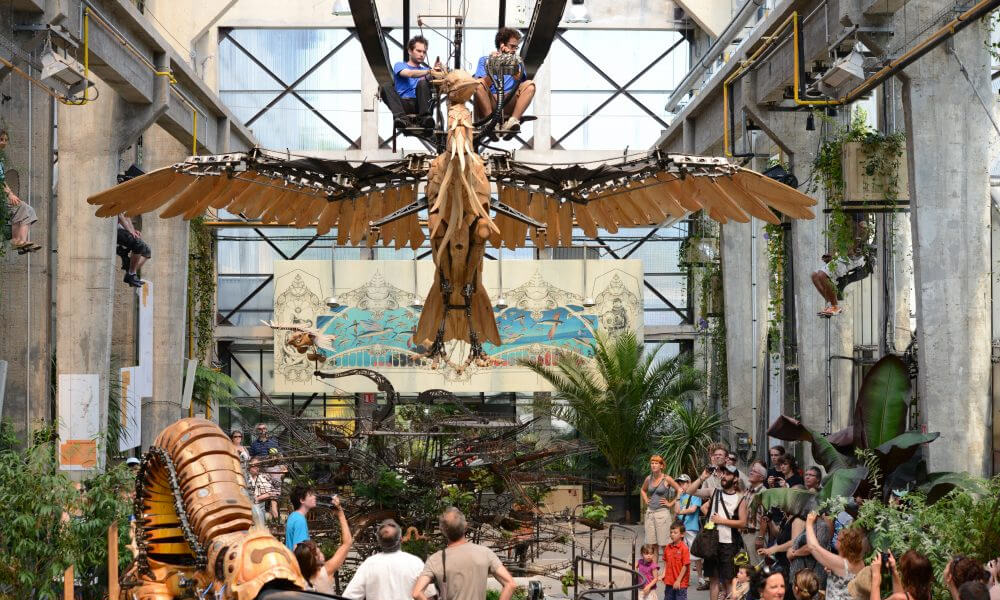 It is an entirely new cultural and entertainment project. François Delarozière and Pierre Orefice are the originators of the project, a blend of Jule Verne's "invented worlds", the mechanical universe of Leonardo da Vinci and the industrial history of Nantes in the West of France at a former shipyard turned into an amazing leisure and cultural centre. SERE maintenance has installed a number of VERLINDE hoists and suspended crane kit components to lift the various assemblies and installations.

A heron with an 8-metre wing span carrying passengers flies over the great model of the Heron Tree set the middle of the Gallery. It houses a whole bestiary of machines: study ant, carnivorous plants, membracidaes... The public are invited to fly over the Heron Tree under the Heron's wings. The Heron is lifted by a 5-metric ton capacity VERLINDE EUROBLOC VT4 drum-equipped electric wire rope hoist A special feature of the machine is that it is fixed to a rotating ring gear that is itself fixed under the suspended crane to perform the circular Heron flights while integrating a pantograph lifting mechanism. The heron and consequently the hoist and crane are radio controlled by an operator.

"Any moving object accessible to the public is subject to extremely rigorous European standards with very strict safety rules which apply to the whole kinematic chain, especially when applied to "flights for the public". While the combined weight of the machine and persons is less than 1.5 metric tons, a hoist with a 20-metric ton capacity had to be used. The Verlinde VT4, installed by SERE MAINTENANCE, is ideal for the job because it integrates numerous safety features: load limiter, double safety brake, overspeed detection system ... It also integrates a position-enabling slave encoder which in time will allow the Heron to be fully automated. The 2 reeving winches are mounted in the pantograph mechanism for visual reasons and to enhance amplitude of movement. We were particularly impressed by the rapidity and involvement of SERE MAINTENANCE and of manager Mr Mathys who carried out the project within a very short time frame" points out Aurelien Jeanjean, Design and Engineering manager at Machines de l'île.

The Machines de l'île centre has many other attractions such as the marine life roundabout. The outsize 22 m diameter roundabout, almost 25 m high, has been set up beside the Loire. This true theatre in-the-round offers visitors the spectacle of strange and scary sea creatures which "swim" around a gigantic mechanical aquarium built on 3 levels. deep sea, ocean deeps, ocean floors and trenches. The maintenance portal frame winches were also installed by Sere. They are designed to grasp the animals to remove them from the roundabout.

Other items installed by Sere include a suspended crane in the construction shop and a portal frame in the maintenance shop.

Meije renews the overhead crane of a hydroelectric plant

VERLINDE launches its new partnership program for all its customers